Hans Ramseier, volonteer in the museum at Vachčres in Provence (Fr), sent me a couple of pieces of petrified wood with the question to say something about them. Especially a fine little stem (click on the photo on the right) and a small piece of black wood looked very promising.
Hans de Kruijk was willing to make the required three thin sections: the transverse one, the radial one (longitudinal, through the centre of the trunk) and the tangential one (longitudinal, parallel to the tangent plane). After some time I received a number of beautiful photos. That was something completely different compared with the wood of conifers! What a variety of forms and elements!

A lot of study and the help of two cracks in the structures of hardwood were needed to understand what was visible in the thin sections: Prof. Pieter Baas of the National Herbarium at Leiden and Raimund Aichbauer at Venray from the Dutch Association of Wood Species Collectors (NEHOSOC). 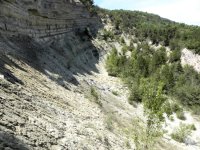 Meanwhile Hans Ramseier had found out that the wood dated from the Eocene. In the summer holidays my wife and I visited the finding place together with him and his wife. The photo on the left (click on it) was taken at that opportunity.

The final result of the research remains a little uncertain. It is a fact that there is much more known about the still living trees than about the extinct ones, which are found only now and then.
The stem probably belongs to a species of the Rutaceae family. This is a large family (at the moment 150 genera and 900 species) of mainly shrubs and trees, named after the Common Rue (Ruta graveolens), a medicinal but also poisonous little shrub. This family includes among others the Citrus genus, which gives us citrus fruits like lemons and oranges.
The origin of the smaller piece is more uncertain. It resembles most of all a species of the Meliaceae, a large family (nowadays 55 genera with 550 species) from tropical and subtropical regions. It is particularly known as a source of magnificent kinds of wood like mahogany.

Identification
Indispensable for the identification of hardwood is the IAWA Hardwood List (Wheeler, Baas & Gasson, 1989) in which the (many) marks of this kind of wood are described very precisely. In combination with a list of the same characteristics at the website InsideWood, in which the applicable marks can be checked, it is possible to get a result. In most cases this result is a collection of possible species. Then can be tried to exclude species making the collection smaller. The internet list contains about 5000 living species of hardwood and 1500 fossil ones. Because the number of described fossil species is relatively limited, the chance to come to an unequivocal identification is very small. In most cases one will have to be content with a family name or a genus name like Quercoxylon (wood resembling the wood of an oak) or Aceroxylon (wood resembling wood of a maple).
For reasons of clarity I shall indicate the stem of the picture above with the letter A, and the small piece of wood (not pictured) with the letter B.

I shall now describe the most important characteristics, referring to the two pieces from the south of France, hoping to give an insight in the structure of angiosperm wood. Completeness will not be possible: in that case the article would get unreadable. 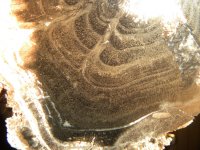 Growth rings come into existence through differences in the speed of growth in the course of the year and they are visible as concentric zones in the transverse section of the trunk. The cause is in most cases the succession of wet and dry periods, or changes in temperature calling a halt to the growth when it is getting too cold. In the latter case the growth rings are much more sharply defined than in the former one. In temperate climate zones usually one ring is formed in a year (an annual ring), but when a stop occurs, e.g. as a consequence of a long periode of drought, more than one growth zone may occur. In a very steady climate there are no growth rings.

In the case of annual rings the cells formed in the spring are large and thin-walled and those formed in summer are smaller and thick-walled. They are called early wood and late wood.
In stem A (see above) the growth rings are clearly visible, but in the small piece of wood B they are unclear.
The presence or absence of clearly visible growth rings is a identification mark. 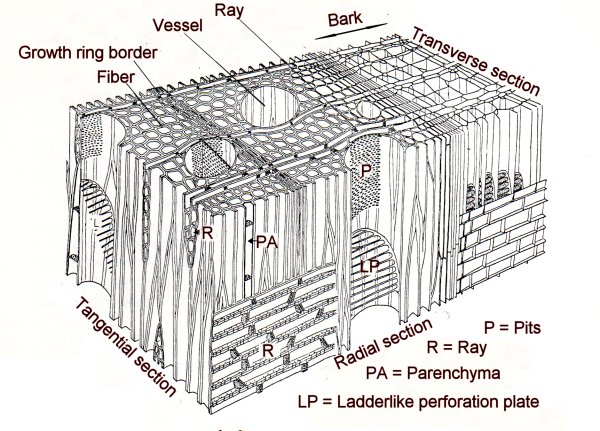 Schematic drawing of a blockof hardwood. In fossil hardwood the bark has nearly always vanished. After Grosser (1977). 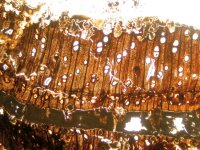 In the transverse section so-called pores are the most striking feature. 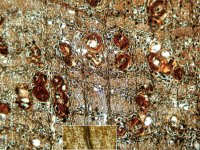 They are in fact the transverse sections of the (wood)vessels, which run longitudinal through the trunk transporting water. They have a noticably larger diameter than the other wood elements. They are constituted of large cells called vessel elements. Between two elements is a perforated wall, the perforation plate (see the drawing above). Click on the three photos on the left and on the right for enlargements and more explanation.

An important characteristic for identification is the distribution of the pores over the transverse section. See the figure below.
- In ring-porous wood the vessels (and therefore the pores) are considerably larger in the early wood than in the late wood. The wide pores form a clearly separated zone. Examples of ring-porous wood are the oak, the ash, the elm, the robinia and the chestnut.
- In diffuse-porous wood the pores all have about the same diameter and they are equally dispersed over the section, independant of the growth zones. Most of the tropical wood species belong to this group as well as many species from the temperate zone. E.g. the beech, the birch, the maple, the lime, the poplar and the willow.
- In semi-ring-porous wood there is a clear difference in diameter between the pores of the late wood and the adjacent early wood, but there is a gradual transition from the larger pores of the early wood to the smaller ones in the late wood in the same growth zone. Exemples are the walnut and the prune.

Concerning our two pieces: stem A is semi-ring-porous and the small piece B is diffuse-porous.

The vessels produce many more characteristics. Here are a couple of them.
- the kind of grouping of the vessels: seen in the transverse section they can all be detached from each other, or being grouped in radial rows, or in clusters
- patterns: the pores can be arranged in specific patterns.
- the diameter of the vessels
- the number of vessels per mm2 in the transverse section
- the length of the elements of a vessel. 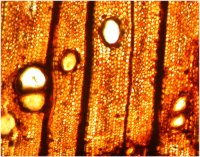 The transverse section on the left hand side (click on it) shows that the wood consists mainly of small cells. These are the fibres. Together they form the ground tissue. A longitudinal section proves that the fibres are elongated with oblique walls which give them a pointed shape. See also the schematic drawing above.
These fibres are connected by very small pits in the vertical walls.

Characteristics used to identify the wood include:
- the thickness of the wall in the transverse section. In our small piece of wood (B) they are very thick. The black spot in the centre indicates what is left of the space in the cell. In stem A they are much thinner.
- the average length of the fibres
- the presence or absence of septs (thin transverse walls within the cell), visible in a longitudinal section
- the kind of pits connecting the fibres (with or without a border). 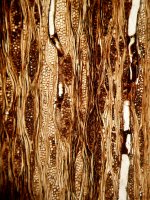 The vertical dark lines in de photo above are rays. They are series of thinwalled cells (parenchyma), running radially to the outside in the transverse section. They are best seen in the radial section. Some of the rays start in the middle of the trunk, the majority begins at a certain distance of the center. One of the functions of the rays is the transporting of nutrients in horizontal direction. See also the schematic drawing of the block of wood above.

In the tangential section the rays are lens-shaped (click on the photo on the right). Being only one cell wide in conifer wood, in hardwood they are as a rule more than one cell wide.The height of a ray varies greatly in different species and even inside one species they can be considerably different. 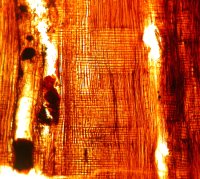 Another characteristic is
- the number of rays per mm. This can be measured in the tangential or transverse section.

Parenchyma
As mentioned before parenchyma consists of thinwalled cells. They can lie loosely dispersed between other cells, like in the scheme, and in that case they are not very conspicuous. But often these cells are grouped in a way that is characteristic for a species or family. It is called axial parenchyma in order to distinguish it from the ray parenchyma. I shall omit the word axial furtheron. This kind of parenchyma is often reckoned to be part of the ground tissue.

In the small piece of wood (B) banded parenchyma is clearly visible (photo right below the scheme). It forms more or less horizontal running lines with a width of 1, 2 or 3 cells. They could be confused with annual rings, but the latter show much thicker cell walls in the late wood. The vertical stripes are rays.
In stem A (photo left below the scheme) parenchyma hardly occurs, which means that A is an example of the fourth category.

For reassurance: in most cases a limited set of characteristics is already sufficient to get a nice result.

Conclusion
It will be clear that it is impossible to give a complete survey of the structure of hardwood. The intention of this article is thus to present the most important elements of this structure. Angiosperm wood is a world on its own and it is not surprising that there are very active associations of wood species collectors, who have cupboards full of rectangular little blocks of wood. They mostly collect recent wood because special techniques are required to make the thin sections of petrified wood.

I must say that Hans de Kruyk and I have enjoyed this adventure very much and that we have had many moments of amazement about the beautiful and in the beginning so puzzling structures of this hardwood. And I am also glad that I could send word to Hans Ramseier that the little stem probably originates from the Rutaceae family and that it could have been an orange tree. In his museum he happens to have a much bigger trunk of the same kind of wood and now he can put a nameplate to it.