Some remarks about the geology
De Saporta put the flora of Manosque in the Aquitanian, i.e. the lowermost formation of the Miocene. Later research, including that made on small mammalian teeth, which have been found in some strata, has proved the sediments to be from the middle part of the Oligocene (Rupelian, Stampian). A large, irregularly shaped lake with dimensions of 40 to 60 km extended at the time. The outline of this lake is approximately the same as the outline of the present Oligocene sediments.
The depth of the lake showed a strong variation, as did the quantity of precipitation in the area. In the course of the Oligocene thick layers of marl and chalk were deposited. In times of dry heat thick layers of gypse were formed through evaporation. In periods of damp heat moors came in existence  in shallow places. The peat which was formed, has transformed to lignite layers (brown coal), embedded in chalk and marl layers. This lignite was exploited in mines and open coal pits till some years after the Second World War. The traces of this acitivity are almost vanished except for some old, sometimes inundated, quarries.

At certain levels in some places plant remains occur, which have been deposited in the fine silt on the bottom of the lake. They are well preserved as compression fossils. This is the flora described here. Look at the table.

Environment and climate in the Oligocene

On the one hand the fossil flora of Manosque is rich in species, but on the other hand also very incomplete. The flora must have grown under subtropical conditions. This is demonstrated by the presence of palms, Diospyros, Laurus, Caesalpinites, Cinnamomum, Glyptostrobus and many others. These are plants of which the modern relatives nowadays mainly occur in the east of Asia. Plants from the moderate regions however are also frequently found : birch, maple, alder, oak, beech, ash and other plants with descendants occurring very commonly in Europe at present. Of the herbaceous plants only water-plants like waterlily and Ceratophyllum, and plants of the banks like ferns, burreed and sedge have been preserved. Most of the plant remains have been transported over some distance before being embedded in the mud of the beach or the bottom of the lake. It is striking that branches with attached leaves are very rare. 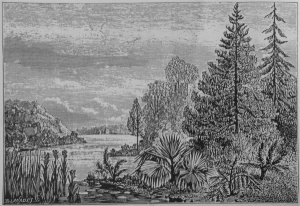 The scenery seems to have been a large, subtropical lake with water lilies and lotus plants, bordered by banks with ferns, burreed, sedge, and so on. In the surrounding woods were laurels, some palms and many other subtropical trees. Furthermore there grew , perhaps on the slopes of mountains, oaks, birches, beeches and other trees which needed a somewhat more moderate climate. In autumn and in winter storms pulled off leaves which landed in the water. They were transported to the lake where they were embedded in the mud. Until this herbarium was opened about thirty million years later.