For already as long as 150 years the Devonian fossil Prototaxites has been collected and studied, but still there is no certainty about its identity. The American J.W. Dawson, who was the first to describe it (1859), thought it was rotted wood, related to Taxus. That's why he gave it that name. At the end of the nineteenth century scientists began to think it was an alga, in fact a brown alga, and this opinion has been established and is now mentioned in nearly every book.
Until an American paleobotanist, Francis Hueber, after 20 years of research published an elaborated paper (2001) in which he defended that Prototaxites was the fruiting body of an enormous fungus ...
And now there is Marc-André Selosse from Paris, who proposes with good arguments that we might have to do with a huge lichen!
Below the facts are put in order.

Prototaxites looks like fossil wood. It is found in the shape of trunks or parts of trunks and these always show more or less clear rings resembling annual rings of trees. On a beach in Saudi Arabia lies broken trunk measuring 5.3 m, which has a diameter of 1.37 m at the base and 1.02 m at the other end. In New York State a trunk has been found sized 8.83 m with a diameter of only 34 cm at one end and 21 cm at the other one. Dawson has described a specimen from Gaspé (Canada) with a length of 2.13 m and a maximum diameter of 91 cm. All these trunks are silicified.

In Holland Prototaxites is not rare among boulders sucked up from the rivers or found in quarries in the east of the country. These are also silicified specimens showing more or less clear (parts of) rings. Besides they are characterized by a silky surface. Most pieces are rather small, but sometimes bigger ones are found.
Prototaxites had its 'flowering' time in the Early Devonian and became extinct in the Late Devonian.

In some Lower Devonian strata in Scotland, Wales and Germany Prototaxites is found in a different kind of conservation, viz. compressed and (sometimes) carbonized. The 'stems' are often bedded together with land plants like Zosterophyllum and Pachytheca and they are striking because of their width. In this case they also resemble fossil wood, but the rings are not visible now. Obviously the trunks have fallen apart in small pieces during the transportation by the rivers. The dimensions vary from millimeters to 30 cm long and 15 cm wide.

Gileppe
Not far from the Lac de la Gileppe near Liège in Belgium a kind of rock occurs containing very small pieces of Prototaxites. Most of these pieces are smaller than 1 cm. The robust trunks have been reduced to fragments having the size of a piece of a match by the transportation through the rivers. Very special in this sedimentation is that the inner structure of the fossil has been preserved remarkably well. The microphotos below and on the next page are taken from peels from this rock. (A peel is produced by etching a polished surface with an acid and, after washing and drying, pouring acetone over it and pressing cellulose-acetate foil on the surface. The foil can be pulled off when the acetone has dried up, taking the organic remains with it. These can be studied under the microscope). 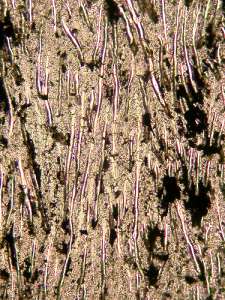 The specimens of Prototaxites from Gaspé, which Dawson had been using in 1859 for his description and of which Hueber used one for his paper (the others have disappeared), show an exceptionally well preserved inner structure.  Prototaxites doesn't have cells like land plants (and consequently wood), but it has tubes. Until some years ago two kinds of tubes were distinguished: thick ones with a diameter of 18 - 50 µm and thin ones with a diameter of 2 - 6 µm. Click on the photo.
The thick tubes have a thick wall (2 - 6 µm), they do not branch and they are not septate. They are quite long, but because of their somewhat flexuous course they run out of the slides and that's why the maximum length is unknown. Lengths of 2.5 mm have been observed.
The thin tubes are profusely branched in all directions and tangle around the thick tubes. They are septate with a pore in the septa and have cells measuring 15 - 54 µm.


Hueber has described a third kind, which is less common. These are thick tubes (15 - 45 µm), but contrarily to the first kind they branch frequently, they are strongly curved, they have thin walls and they are septate. Furthermore there is a pore in the septa. In some places they are so profusely branched that clusters are formed, which can be seen on a polished surface as spots of a different colour.