Wood of the horsetail tree Calamites

Calamites is one of the most well-known fossils of the Carboniferous and the Permian. It is found as a stem with a longitudinal ribbing and, at some distance from each other, transverse lines or nodes. In most cases the stem of Calamites is flattened, but sometimes it is more or less threedimensional. In this case the fossil shows no internal structure: it is just petrified sediment. This is the reason that it is difficult to get an impression of the composition of the Calamites tree. 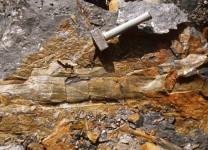 Rarely however stems and branches are preserved extraordinary well, i.e. when they have been mineralized as a consequence of exceptional circumstances. This is for example the case in the Lower Permian depositions of Chemnitz (Germany), where the trunks are silicified as a result of an enormous vulcano eruption. In the renewed Museum für Naturkunde in this city the worlds biggest Calamites trunk is displayed. And it is structurally preserved!

Coal balls
An other example of exceptional preservation is that of the coal balls. These are concretions of calcium carbonate and/or other minerals, occurring in some of the coal seams of the Upper Carboniferous (Pennsylvanian). They have been found in the coalfields of Lancashire and Yorkshire in England and in several places in the USA.
The microphotos in this chapter are taken from a couple of thin sections from coals balls, which were bought in 1922 by the University of Groningen (NL) from a laboratory in England.

Casts
The transverse sections of the two small trunks below show a serrated edge. In the stem on the left is an empty space to the inner side of the edge, in one on the right this space is filled with amorphous sediment. In young plants this central cavity was filled with thinwalled parenchym cells (pith), whereas in older trunks pith only occured in the outer regions of the central cavity.

Structure of a Calamites stem

Look at the drawings above. In the transverse section the circle with the small round holes attracks attention. At the place of those holes the very first wood vessels (the protoxylem) of the young plant were located. These were of a very small diameter. Around them the metaxylem developed, also with very narrow cells. Next the secundary growth started from the cambium, a one-cell-thick layer of tissue, forming secondary wood to the inner side and no phloem to the outer side. It was a unifacial cambium. In the course of this process canals arose at the place of the protoxylem and the metaxylem. These are called carinal canals. So the holes are transverse sections of these carinal canals.
Between the successsive xylem bundles protrusions of the pith were formed: the rays. These are, however, not always present. In the latter case the secondary wood forms a unbroken cylinder.

In the, rarely preserved, bark are air ducts at regular distances from each other. They are called vallecular canals. Because of these canals the outside of the living Calamites tree showed longitudinal grooves and ribs. This ribbing is seldom visible because the bark is hardly ever preserved.

Photos of stems of Calamites in coal ball slides
Click on the photo to enlarge it. Click Zoom to explore the photos in detail (fast internet recommended).

Genera
Three genera are distinguished in structurally preserved stems of Calamites. The above described kind of wood is called Arthropitys. It is the most common type. Moreover Arthroxylon and Calamodendron have been described. The differences are found mainly in the way the parenchym cells are situated amongs the wood cells. It is not certain whether these characteristics have systematical significance or not. It is possible that they have to do with development stages or with the place in the trunk. 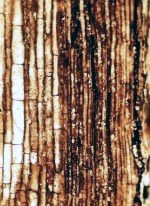 The cells of the secondary wood are very elongated in the longitudinal direction of the stem.
To the left in the picture lay the pith cells, to the right the wood cells. The latter provide stiffness and they manage the water transport. They are called tracheids. The water moves from one tracheid to an adjacent one through holes in the radial cell walls. These holes are sometimes the centre of a so-called bordered pit (a circular area with a hole in the middle), but ladder-like structures occur also. Click on the photo for more details.


Summarizing it can be said that the horsetail trees have achieved a maximum of solidity, thanks to a very efficient way of wood production. The cylindrical structure with a large central cavity appeared to work very well. The proof is that horsetail trees could reach a size of about 20 m. Their extinction will not have been caused by the woodstructure.