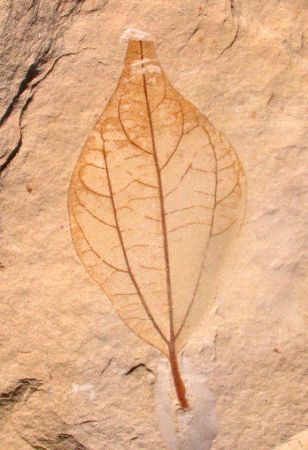 Leaf border entire. Leaves rather wide, oval, accuminate. Three main veins, in most cases starting from one point not far from the leaf base. The two side veins run in a curve to the top where they often meet with other side veins starting from the main nerve in the upper part of the leaf.
The width of the leaf is variable. The leaf is not rounded at the base.
Rather common leaf. Dimensions very variable.
Nowadays the name Cinnamomum is only used for cinnamon leaves with preserved cuticle. In other cases the genus name Daphnogene is used.