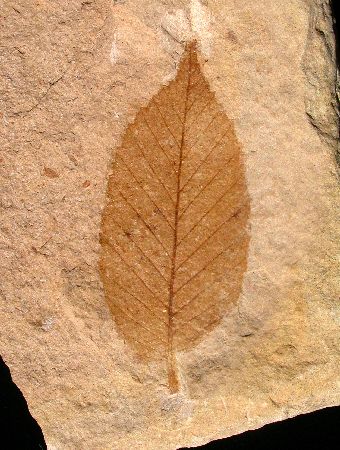 The leaves of these four species are in most cases hard to distinguish with certainty from each other. They have a rather short petiole, a rounded base and a doubbly serrated border. The secundary veins are regular, straight and parallel and they branch sometimes near the border.

The leaf base of the elm is asymmetrical (but the one of the hornbeam is sometimes too). The leaf base of the birch is often heartshaped. In the leaf border of the elm a bigger tooth is often followed by a smaller one, while in Carpinus and Ostrya the teeth are more irregular. The teeth of Ostrya are more elongated than those of Carpinus. The teeth of the leaf border of the birch are of about the same size.

Carpinus and Ostrya have mostly more elongated leaves than elm and birch. These leaves are not very common and often damaged.