Fruiting bodies of fungi have an inner structure of tubes, called hyphae. There are three types of hyphae: skeletal hyphae, binding hyphae and generative hyphae. Most fungi exist of only one of these types (the generative hyphae), but some have two or three. The skeletal hyphae are (mostly) straight, stiff and they are thickwalled. They occur in some fungi living on wood. The binding hyphae wind between the other hyphae , they have septa and, as the name says, they have a binding task. The generative hyphae have a reproductive function : they form the structures which eventually bring forth the sporeproducing cells. They are thinwalled, septate and they branch repeatedly.

It is thus quite understandable  that Hueber uses these terms in his description of the structure of Prototaxites.
The thick, unbranched tubes are in Hueber's view skeletal hyphae: they provided stiffness to the organism.
The thin, winding tubes are binding hyphae: they held the skeletal hyphae together and contributed in this way to the toughness of the body.
The thick, branching tubes with septa are generative hyphae.

Ascomycetes and Basidiomycetes
The fungi can be divided into several groups. Two of these are the best-known: the Ascomycetes and the Basidiomycetes. In the first group the sexual spores are formed in elongated sac-shaped cells, in the second group they are formed on the top of minute projections growing from special cells, called basidia. These sac-shaped cells and basidia originate from a layer of cells, called hymenium, which is formed on special parts of the fruiting body of the fungus, e.g. the gills or the pores. In the Basidiomycetes the spores are 'launched' when they have reached maturity.
Hueber has found structures in his slides resembling (incomplete) basidia and thus he assumes that Prototaxites belonged to the Basidiomycetes.

Origin of the rings
The presence of rings in the trunks of Prototaxites can be explained by supposing that a new growth increment was formed time and again. This occurs also in living fruiting bodies of fungi. An example is the Echte Tonderzwam which shows growth increments not only on the outside but also in the inner structure. Click on the above photos. The hymenium is situated in the tubes on the lower side of the body: from here the spores are shot off. After some time new layers of tubes covered with a hymenium (lower placed arrows), are formed . The same can be said of layers of sterile tissue (upper arrows). In a year several increments can be formed and because woody fungi usually live longer than one year, quite a few layers can often be observed. 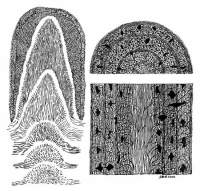 Hueber concludes from his microscopical research that the hymenium of Prototaxites covered the whole outside of the fruiting body. This occurs in recent fungi among others in Clavariadelphus pistillaris. From time to time a new layer of tissue was formed on the outside mainly consisting of skeletal and binding hyphae but also with some generative hyphae. At a certain moment the generative hyphae started to branch frequently and they formed a new hymenium on the outside of the fruiting body. Such a combination of an all-covering hymenium and periodical growth increments does not occur in the living fungi, but the separate systems do (as shown before).
Hueber's growth model can illustrate the process. Click on the drawing.

Medullary spots
On polished surfaces of well-preserved American specimens of Prototaxites rather regularly spread, spindle-shaped spots can be observed, resembling mark rays in some way. I could not find them in my own specimens, probably because of the bad state of conservation. Slides prove that in these spots the generative hyphae are profusely branching, forming clusters. Hueber speaks of 'coltricioide clusters' because this kind of clusters is also found in Coltricia perennis. The different colour on these spots could be caused by mucous secretion or something like that. The spots are coloured black in the growth model above.

Clamps and dolipores
Characteristic for generative hyphae in recent fungi are clamps. These are formed when new cells are produced. A clamp is a bow-shaped thickening at the place of a septum in a hypha. It is beyond the purpose of this site to go deeply into this matter, but the main aspect is that the clamps are necessary for the distribution of the nuclei over the cells when a new cell is formed. The septa in the hyphae are perforated by a small canal, called dolipore. This enables the interchange of protoplasm between the cells.
Hueber has found some clamps, or better remains of clamps, in the generative hyphae of Prototaxites. Click on the left hand photo. They are however very rare and a complete clamp (with a arched tube on the outside of the hypha) has not yet been found. Hueber has also taken photos of (doli)pores in septa of generative hyphae. Click on the right hand photo. These pores have been described earlier by Schmid (1976).

The difference between Prototaxites and living 'woody' fungi is the unlimited perennial growth of Prototaxites. Therefore the fruiting body could grow so large. The only limitations were, according to Hueber, the capacity of the mycelium to provide enough food and water, and influences from outside, e.g. storms.
Living woody fungi can also grow very large: fruiting bodies of 1 m have been observed.

Because branched specimens are hardly ever found, Hueber concludes that Prototaxites must have been the columnar fruiting body of a huge fungus, sized up to 8 m. Probably rootlike structures (rhizomorphs) served for anchoring in the ground. Click here to see the Hueber's fine reconstruction again.
Prototaxites must have been by far the greatest element in the landscape of the Early Devonian. Plants did not grow taller than around 50 cm at the time and stems did not become thicker than a couple of centimeters.

In a recent paper by Boyce et al (2007) support is given to the idea that Prototaxites was a fungus. The scientists have investigated the ratio of the carbon isotopes C-12 and C-13 in Prototaxites and in plants found in the same layer. This ratio showed a much larger variation in Prototaxites than in the vascular plants. This fact can only been understood by assuming that Prototaxites did not make its own food from carbon dioxide and water but that it gained its food from the underground (like fungi do). A microbial mat with a dominance of cyanobacteria is a possible underground. Such mats were probably rather common in that time, whereas they now exist only at places where plants cannot live (e.g. stromatolites in Australia). Read more about this subject..