In 1872 the Englishman William Carruthers published a venomous comment on Dawson's opinion that Prototaxites was petrified conifer wood. He proposed three possibilities: a lichen, a fungus or an alga, but was convinced that it was an alga and he gave it a new (invalid) name: Nematophycus, meaning thread plant.
For intuitive reasons Prototaxites has mainly been placed in the group of the brown algae, particularly in the neighbourhood of the Laminaria-like plants. These algae can attain a huge size (up to 70 m) and they grow often in submarine forests. In this case the plants develop a kind of trunk (called cauloid) with leaf-like structures on top (phylloids). The alga is attached to the sea bottom by root-like structures, called rhizoids.

In 1930 Kräusel and Weyland described leafy structures, attached to a stem of Prototaxites. Unfortunately they didn't picture them and furthermore these fossils disappeared in the war. Later on 'phylloids' have been found in Germany associated with Prototaxites, but not attached.
Jonker (1979) also described leaves attached to stems of Prototaxites, but in this case it has been demonstrated that they were not leaves but very thin layers of sediment. 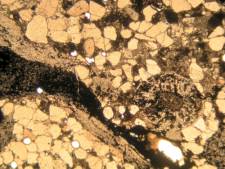 It has also been proposed that the enigmatic organism Nematothallus, which is a black patch of a couple of centimeters with a mat of thin threads or tubes underneath, could have been a kind of leaf-like structure of Prototaxites. But this plant has never been found attached to Prototaxites either.
Summarizing it can be said that there is no convincing proof that leaf-like structures were attached to Prototaxites trunks.
Furthermore it is striking that the alga(?) Pachytheca is very often found in the same layers as Prototaxites (click on the photo). This fact has led to speculations that Pachytheca and Prototaxites perhaps originate from the same organism. But in this case no proof has been found either. 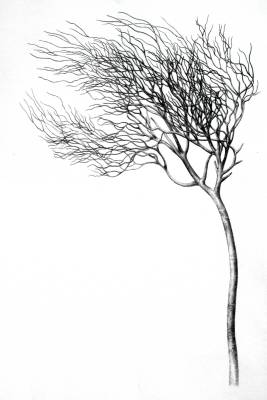 The most inportant defender of the alga theory at the moment is Dr. H.-J. Schweitzer from Bonn (Germ.). He has renamed a plant which was described in 1974 as Mosellophyton hefteri, in Prototaxites hefteri. This plant had whip-shaped branches and it lived in the tidal zones. Most of its fossils have been found in the quarries of Alken and Waxweiler in Germany. On the right is the restoration of this plant by Schweitzer.

It is remarkable that Schweitzer includes this plant in de genus Prototaxites because hardly ever more branched parts of Prototaxites are found. He is however relying on the transverse wrinkling of the surface of the fossil, which is also a property of the 'real' Prototaxites in the Eifel region.Unfortunately the fossils are only more or less compressed stems without preserved inner structure.

In 2000 he described the discovery of a branched stem of Prototaxites in the quarry of Waxweiler in the Eifel, which he interpreted as a part of the 'root' system of the alga Prototaxites. And indeed it resembles the rhizoid system of a Laminaria plant from the North Sea very much.

Action!
In an attempt to solve the puzzle my wife and I went to Waxweiler and there we have collected in the Lower Devonian strata of the quarry (click on the photo on the left). I am sorry to say that we didn't find any Prototaxites-like fossil (on the other hand we did find a very small eurypterid). Others however were more lucky a short time after that. They discovered a 40 cm branch with whip-shaped offshoots, which was unmistakebly the disputed plant. Click on the right hand photo to see the details.
The solution is probably that this plant is indeed an alga. Dr. Wutke of the new museum in Waxweiler on the conquest of the land (which will be opened in July), told me that he intends to call the plant "Mosellophyton" hefteri.

Schweitzer has always supposed that Prototaxites lived in the sea, but it has become clear now that it was a land dweller. In most cases the fossils are found in river or delta sediments. Mostly the trunks have fallen into pieces during the transportation in the river. The Taunus and Emsquartzite, which also contain (real) specimens of Prototaxites, is a sandy deposition near the coast. The Prototaxites are found there concentrated in some places, absent in other places. Schweitzer concludes that Prototaxites was growing in submarine forests along the coast, but it is also conceivable that rivers flowed into the sea in those areas.

Hueber shows in his paper that the structure of the cells of Laminaria-like plants in transverse section is quite different from that of Prototaxites. In the alga the cells are neatly ordered in radial rows and there is a clear division in pith, cortex and epidermis, but the hyphae in Prototaxites are dispersed randomly over the complete section.
The possibility that Prototaxites was an alga, can thus be put aside with an easy mind.