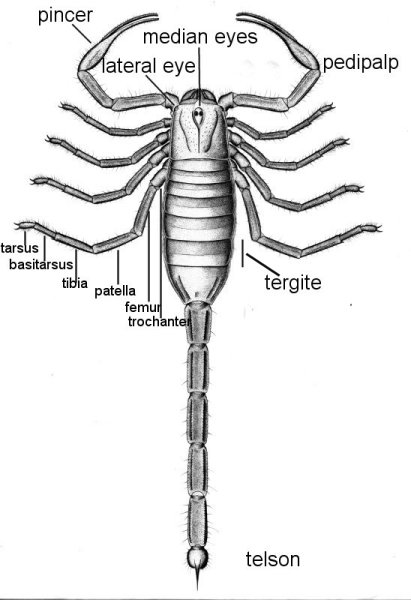 This is a reconstruction of the animal, in which at certain points data from other specimens are used, e.g. in the legs and the tail. Move the cursor over the picture to see the fossil itself.

The prosoma
The backshield is approximately square with a somewhat heartshaped and elevated middle part. Here are a pair of large eyes situated on a tubercle. They are called the median eyes. Besides the pair of median eyes scorpions possess 2 to 5 pairs of lateral eyes, also located on tubercles.

The claws (called pedipalps) of the Piesberg scorpion are remarkably slender. The coxa is invisible: it is situated on the lower side of the fossil. The trochanter  is somewhat clockshaped as can be seen in the left claw. After this come femur and patella, showing a couple of ridges, as is normal in scorpions. The pincer consists of a fixed finger, which originates from the tibia, and a free, movable finger, the tarsus. This pincer too is in the Piesberg specimen very slender, compared with those of other scorpions.
The remains of the legs are poor, but enough to get an image.

The mesosoma
The middle part consists of the abdomen segments 1 to 7. The carapace of such a segment is called a tergite on the dorsal (= upper) side and a sternite on the ventral side. The tergites seem to be divided into two by a faint transverse line. The seventh and last tergite narrows in the tail.

The metasoma
The tail of a scorpion consists of five fused segments, plus a spherical telson with a venomous sting. The fossil shows four segments and something resembling a sting. Probably it isn't that, but the remainder of the fifth segment. The tail segments show clear ridges and furrows. The tail is again more slender than those of other Carboniferous scorpions.
Picture after Dunlop et al, 2008, text added.