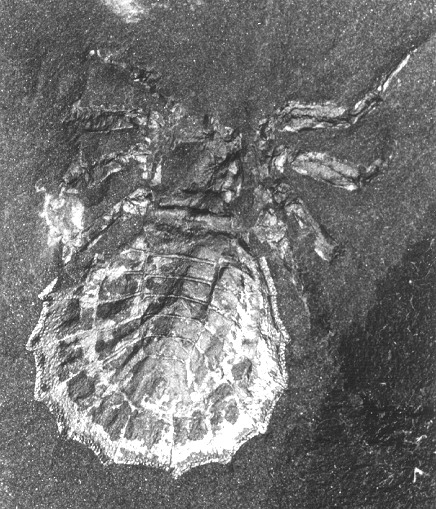 This spider was found by Wil Costers in 1994 in the spoil heaps of the coal mine in Ibbenbüren (Germany). It is a splendid specimen with all eight legs still present. Prof. C. Brauckmann recognized it as Maiocercus celticus. This species belongs to the class Arachnida and in this to the order Trigonotarbida. The animal had a exoskeleton of chitin that was composed of plates.

Hans van Essen and I found five more fossils of the same species in this spoil heap in the spring of 1996. These were however less complete. The findings are nevertheless special because of the fact that fossils of arachnids are very rare.

Maiocercus celticus was a relatively large species within the Trigonotarbida. Probably the animal was a predator. His strong legs are an indication for this. Presumably the spider was lying in ambush in the dense, humid vegetation, waiting for prey such as smaller arthropods.

Other specimens and reconstructions